Start › The most innovative helper for fat reduction: LIPO

The most innovative helper for fat reduction: LIPO 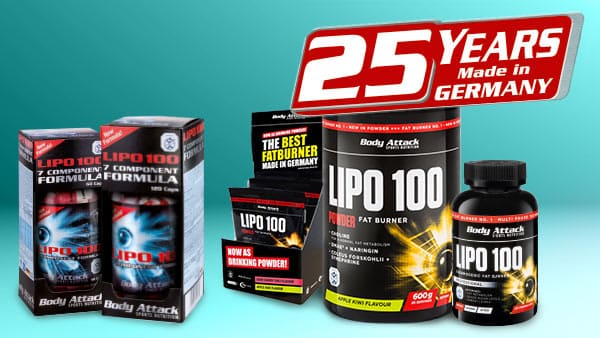 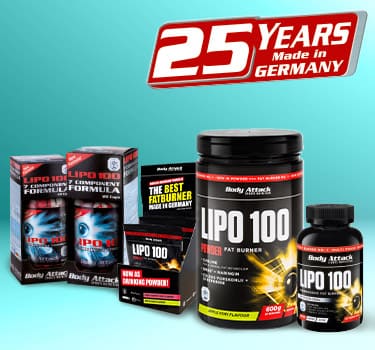 It was done! The first Body Attack products were launched in ´98. The focus of the starter trio was on muscle building (click here for the story). Ten years later, and after many other innovative market launches, the time had come: Reduction! Correctly read: you will get your fat away - in the truest sense of the word. When your favourite trousers pinches, every step becomes a challenge and your muscles lie deeply hidden in a valley of subcutaneous fat, the time has come: your pounds have to tumble. And as quickly as possible! How does it work? A question that we have been answering for more than ten years with our most innovative weight loss aid LIPO 100. 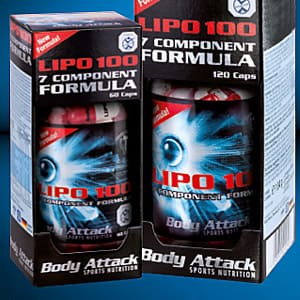 One thing is certain: the question of rapid fat loss is as old as mankind itself. All right - the idea that our ancestors carried their clubs through the cave with massive love handles is a bit bizarre. And with regard to hunting, it is very unfavourable if the ambitious Stone Age inhabitant runs out of breath after just a few meters. But Jan also began to wonder how he could productively help fitness beginners and athletes to lose weight. And here we write a year in which you spent numerous hours on Myspace and StudiVZ.

This case seemed to resemble the X-Files. Various attempts of the one or other food supplement manufacturer bit their proverbial teeth out at said fat pads. The effect of most "fat burners" was more like a placebo with random mixed ingredients. Or they contained questionable substances, which led to uncontrolled stomach behavior or the head to "burning". Ouch!

The Body Attack team knew: This is where we have to start! Uh... wait... fat and start? Better said: we have to attack! But what did it look like, the right formula to fight the unloved love handles? Of course (keyword: quality from the very beginning), the new helper in terms of fat loss should also consist of natural ingredients and set new standards in quality. The declared goal of our team of experts was simple and ambitious: to raise the metabolism to a higher level through high-quality plant substances, with reliable helpers from Mother Nature´s garden.

FROM "LIPOLYSIS" TO LIPO

The solution: the bioactive substance piperine made of black pepper. This has a stimulating effect on digestion. The new formula also contains the B-vitamin-caffeine stimulant from niacin, biotin, iodine, guarana and green tea extract, which minimises fatigue during training and prevents the metabolism from switching to a low flame. In 2008 it was done! The... yes, what was the product actually called? During basic research and the following recipe tests, the term "lipolysis" (from Greek for fat dissolution) was repeatedly used as part of the metabolism. Our supporter should of course be called that simple and characteristic too - but rather short and crisp. "LIPO" was born. More precisely: LIPO 100! "Yes, 100 what?”, we hear our math teacher from the past sigh. "Meters, kilograms, gummi bears?" ... No! The 100 stands for one hundred percent. Because exactly this value should be tackled with our product. For 100 percent effective fat reduction. 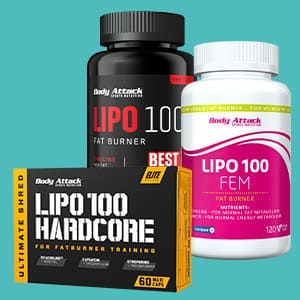 The popular LIPO 100 has been continuously refined and perfected. This resulted in the special formulas for LIPO Fem (especially for women) or in the liquid form as the refreshing LIPO Drink, which you can get in many gyms. With LIPO 100 Hardcore, which has been available since 2017, we have developed the strongest version for your fat burning workout to date: In addition to the caffeine, the two natural stimulants theobromine and theophylline provide the extreme kick. Hence the naming Hardcore. Furthermore, a generous portion of cocoa bean extract (polyphenols) stimulates blood circulation, which in turn can have a positive effect on your health.

Has this enticed you to get rid of some pounds? Of course one thing is as rock solid as the chest of Arni himself: we certainly do not drag clubs through any caves anymore. But unsightly love handles? They do not have to be in the meanwhile digital age. And our LIPO products support you in exactly your diet & definition goals - for more than ten years!